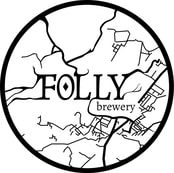 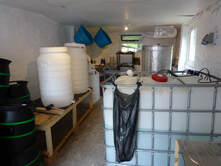 I started brewing, like many others, using those all in one Coopers tins at university.  These initial attempts did not go very well.  A combination of impatience and raw sugar meant that beers were never quite there. However, an interest was piqued.  I applied for a job at the hometown brewery and was placed in the centre of operations:  The packaging laboratory.  Things were rosy until Thwaites decided it wanted to be a estate landlord not a brewery.

The EU directive meaning that a reduced duty rate of 50% is applicable for small brewers, meant that the economies of scale did not offer the same advantages that they once did and there was the explosion of small breweries opening up.
​
Having been let down by friends in previous endeavours to open a brewery, the continuing reduction in job security and pure jealousy of others following my dream, The Folly Brewery was essentially born out of frustration and envy.  With love.
The concept is vaguely inspired by the Rivers of London, Peter Grant, novels by Ben Aaronovitch.  Please buy his stuff from any good and indeed bad booksellers I doubt you will regret it. https://www.hive.co.uk/Product/Ben-Aaronovitch/Rivers-of-London--The-First-Rivers-of-London-novel/1529201

The brewery is a 1 brewer’s barrel brew (160 litres) length affair located in my garage, it is focused on cask, real ale.  Due to the time restrictions on myself I will be limited to brewing one day in a fortnight which will restrict my volume output to around 320 litres a month or less than 4000 litres per year.
There will be three core beers; a flavoured stout, a rye IPA and a blonde.  All are around 4 - 5% ABV and are sessionable in that no flavour is too cloying and beers are designed for balance.  These will be sold to local freehouses, micropubs and potentially festivals. Eight, nine gallon casks per month.
This is essentially the vision for the business.  There is little scope for expansion at the current site and no extra time for me to brew.  So any expansion would have to be via contract brewing and packaging.  This is a route that I don’t particularly want to go down.
The U.S.P. of the business is that I will only brew beers which I would like to drink myself and the best example of the style for sale, although the beer is interesting it is not too experimental that it will put people off trying it.  It will not be high gravity brewed and liquored back to sales strength or rushed through fermentation.
​
The irony of railing against marketing on a marketing tool is not lost on me, however, the idea is to let the beer speak for itself.  In glowing terms.   I’ll stand behind any beer released by the brewery as the best example of the style. I will endeavour to make the best pint you have.  If it is not up to scratch it will simply not be released for sale.​

I'm extremely proud of the brewing heritage that I can claim from the location of the brewery.  I was educated in Blackburn and spent a number of years working for Thwaites before it closed.
My nights out have stretched far and wide within the county and Boddington's cask is what got me into beer in the early years.

It's no coincidence that Blackburn was traditionally a major centre for brewing.  Not only was there a large workforce working in extremely dry conditions within cotton mills but the water is exceptionally good and soft.  This meant post shift they were ready for a good few pints before they had quenched their thirst.  The beers needed were sessionable and refreshing.  Hopefully both characteristics shared by my creations.

I don't subscribe to the idea that you should "Burtonise" brewing water.  The "Burton Snatch" is fucking horrible.  Water is ~ 95% of the beer so if you're starting with shite, you'll end up with shite.  You cannot polish a turd, just roll it in glitter.  The water I use is from the Forest of Bowland and is exceptionally soft and has no gypsum or salts added to it.
Copyright © 2020 Folly Industries Ltd. All rights reserved.
Alcohol Wholesale Registration Scheme No. XPAW00000113897
Registered in England and Wales. Company No. 12315003.​
Powered by